The Love Your Spouse Challenge!

Day 1: I’ve been challenged by a dog who lives next door (and sometimes whispers instructions to me) to post a loving picture of my spouse every day for SEVEN DAYS along with one great thing he’s done Well David Chrzanowski one of my favorite things you’ve done is free the slaves!

The Love Your a Spouse Challenge! Day two of posting a picture of my handsome 25 foot tall yellow spouse. I love how you never let me miss a sale!

Day 3 of the loving your spouse challenge!
So confession! We actually met online.
And this was David’s Ok Cupid cover photo. I know! You can see why I’d want to snap up that hottie! But (of course!) the picture was so handsome-I was a little worried that I’d show up on our first date, only to find out I’d been catfished (and he didn’t look like this at all)! But as you can see he is just as handsome as the first pic I ever saw. Love you baby!

Day 4 of the loving your spouse challenge!!!

Boy, do I remember this day! Look how cute he is! Can you believe that we were ever this young or fictional?

Anyway so this is a pretty cutesy memory (l apologize for getting so sentimental : )

We were at school and David leaned over his desk, pulled my hair, and called me “carrots”. I laughed.

“Only a ginger would claim that,” he said.

My smile faltered. I looked in the mirror.

“I’m not sure I understand the joke?” I said.

“You wouldn’t! Gingers have no soul, carrots. Can I ask you a question? Do the drapes match the duvet cover in my grandmothers bedroom?” David said.

“I don’t….I’ve never been….I’m not sure what that metaphor is trying to….”

“Carrots! Carrots! Carrots!” He screamed at me pulling out a sparkler and lighting it. He waved it over my head. “Your hair is redder than a FIRE,” David continued to scream though his voice was growing hoarse.

“Hey do you get calls from Arby’s telling you that you’re their cartoon spokesperson come to life all day long-carrots?”

I looked in the mirror again. Maybe I was wrong…maybe I did have red hair. I turned around in a circle feeling dizzy.

The crimson wallpaper in the classroom seemed to be shimmering and rippling behind me.

He was right? Wasn’t he?
I smiled tentatively.

“I guess we are,” I said. I began to laugh. A strangled, wisp of a thing that started in the back of my throat and erupted out of me. “Yes!” I repeated, “we really are.”

David smiled back at me. He nodded.

Around me, the room warmed in approval. It looked like flames swirled and crackled in the patterns.

The walls were smiling too.

Day 5 of the love your spouse challenge!

Did you know that this challenge was started to remind people about the value of traditional marriage between one man and one woman?

Well in the spirit of that! I want to share a picture from our wedding night. I was a nervous blushing bride having been sold for 6 cows and a shake shack coupon. He was an experienced gentleman who had locked many a woman in the attic in his day.

So I was nervous! What would he look like when he took off his dapper wedding suit!???

Well, I snapped a picture that night. I know…racy! But…hear me out! I took a picture so that all the other brides out there know what to expect. And it wasn’t scary at all! A husband is just a normal green, scaly monster with thousands of glistening teeth, who can read minds, and flatten his bones to slither between cracks in the floor.

This is why traditional marriage is so important to maintain.

So Now-I’m watching you sleep, darling. Smiling as your little lizard tongue darts in and out of your mouth while you dream! I’m so lucky.

And just so you know, I bought a bucket full of crickets from the pet store to hand feed you when you wake up! So wake up soon baby! Xoxox

Spouse Challenge Day 6! I was challenged to post a photo that celebrates a pivotal moment in our marriage. This one sure was a big one!

So without further ado-TBT to the time David hit me over the head with a shovel, dragged me into the street, and then repeatedly ran over my body with our car to try to make it look like an accident!

Boy-did we have a good laugh when I woke up as he was burying me alive in the backyard. Not my first time in the car hittin rodeo, buddy!

Although- I laughed even harder when he didn’t stop covering me with dirt despite my vocal protests! Sometimes- I think when I talk he just hears the horn from Peanuts! Men!

I dug my way out and THAT’S when David had to consider that sometimes in a marriage you have to compromise! Like when he wanted me dead and I wanted to be alive.

But did he learn that lesson? Nah. Ugh men! So stubborn! He just started slowly poisoning me with arsenic!

But guess who has an iron stomach and learned a thing or two from the princess bride!!? So when I didn’t die from the arsenic, he just stabbed me repeatedly. Haha.

It was hard to come back from having my liver cut out and fed to a llama (he bought on Ebay) so this time-I STAYED dead.

But (of course) the jokes still on him! Because I became a ghost and am paranormal activity-ing the crap out of him! Hahhaha-good times, babe!

I swear sometimes men are from Mars and women are ghostly apparitions floating above your bed at night to watch you sleep.

Day 7 of the love your spouse challenge.

I love this picture.

It was 2012 and I was serving time in a prison in Albuquerque for grand theft auto. David surprised me by being there to pick me up the day i got out-

“Who’s the mark?” I said sliding into his red convertible- still in the formal silk striped dress I had worn from my last “job”.

“I know you,” I said taking a swig of the cold coke he had in the cup holder. “You don’t pick me up from the big house for nothing.”

“Maybe I missed you.”

“Cut the crap, Chrzanowski, and tell me the score.”

He studied me for a moment.

“Ever heard of Ralph’s grocery store?” he asked.

“Sure,” I said. Everyone knew about their great value and fresh produce. “I might’ve been to Ralphie’s a time or two…oh no! Get that look out of your eye. Everyone knows that Ralph’s is a fortress. Ain’t nobody who goes in and steals….EVER getting out.”

David shrugged, and leaned over in his seat closer to me, his hands lightly fixed on the wheel.

“Say I have a plan. A plan to steal all the rotisserie chickens in the place.”

I stared at him. All the delicious rotisserie chickens from Ralph’s? It was madness. Impossible.

“11,” i repeated with wonder. “You mean ‘A Cincinnati hot roller McCobb’…” My eyes widened. It could work. But I saw an obvious flaw in his plan. “But 11 guys?…they only keep 7 maybe 8 chickens at a time, Chrzanowski. That don’t split 11 ways.”

“Ah ,” he said as if he’d been waiting for that. “They do.” He smiles. “Except on the 4th of July. Then….They triple their chickens for the picnics.”

“You’re saying they’ll have 24 chickens in the case?”

“We’re going to need to prepare like crazy,” I warned. “And for this to work….we’ll need to go all the way.”

“Marriage,” he said matter of factly. “It’s the only way we get through that automatic door.”

Was I really willing to enter into a fake marriage for this? I had been a con woman for a long time. But I had my limits. My lines I didn’t cross. And love had always been one of them.

But 24 chickens…split 11 ways? Well that could last a week. Maybe more with sides.

“I’m in,” I said slowly. “Let’s pull together our team and get us some chickens.”

David whooped and pumped his fist in the air. We were on the highway now. He sped up, and a warm breeze flew wildly through my hair. It billowed out behind me and my sunglasses whipped off my face. I laughed

“That was some proposal, Chrzanowski,” I said raising my eyebrows. 24 chickens-God help us.

The rest (as you know) was history. I’m tagging all my best friends to do the challenge next!

Pikachu! Benito Mussolini! All of the newsies! And the ghost of Harriet Tubman!

Have fun guys! I sure did.

Pictures of Hotel Rooms From My Recent Trip That PROVE That Someone is Willing to Sleep with Me. 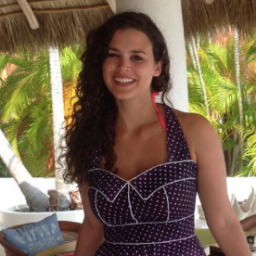